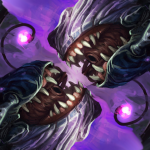 By Chimerae, September 19, 2015 in Events and Tournaments