Are there rewards for taking certain place in pvp ladder? 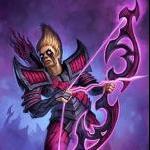