FinallyForged created a topic in Suggestions 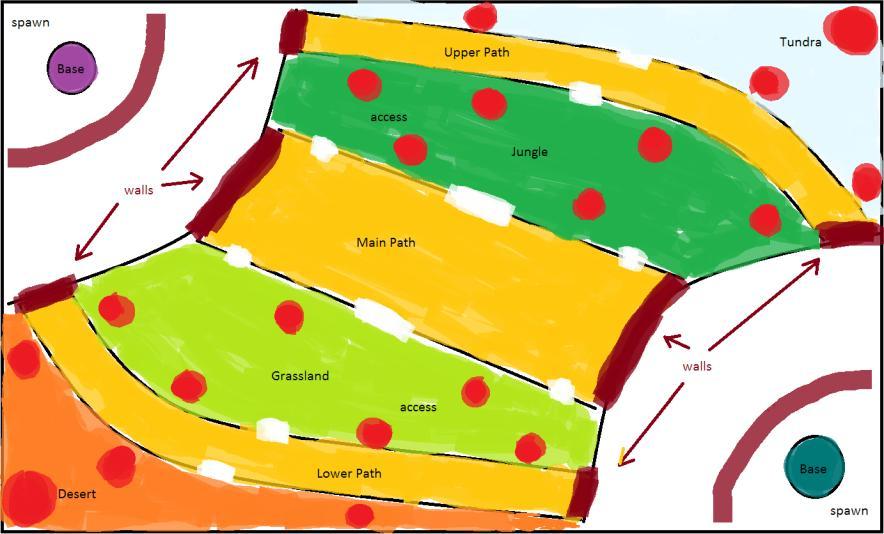 The biggest issue with the game is the lack of PvP variety, I used to play this back in the EA days and I think people drifted away from the game for this reason, preferring the matchmaking of RTS and MOBA games. I would suggest adding more PvP variety that will allow newer players to practice with their lowly cards and have fun doing so (hopefully some day when there are large enough numbers we can get matchmaking). To get this going I propose a casual PvP non-ranked 3v3 and 5v5 maps that people can practice and have fun with since 1on1 against experienced fully decked out players isn't much fun.
Later on these maps can be made into ranked versions.   Here are the details for such a specialized 5v5 map. a)   The map is designed somewhat like a MOBA but without minions.
b)   Just like a MOBA players spawn at opposite sides of the map near their base and like a typical sports game that requires you to score a goal at the opposite sides' end, you're goal is to destroy their base.
c)   The defenses are put up by the players themselves, but walls exist between the player bases and the 3 lanes.
d)   Like a football game players will decided whether there are 2 players on defense & 3 on attack or any other variation such as all 5 on attack (like i said it is meant to be a fun map).
e1)  There are 4 "jungle" or NPC areas (1:Desert, 2:Jungle, 3:Grassland, 4:Tundra); these are either side of the 3 lanes which have strategically placed access points.
e2)  The jungle areas contain NPC bases that when conquered offer rewards (eg. a juggernaut that can you can control). Such an implementation should hopefully spawn lots of strategic variety which is somewhat the intention so as to draw out some fun from the game.
A very rough sketch of this idea: